Ti Kwan Yin (also spelled Tieguanyin) is commonly called "Iron Goddess of Mercy," as it's named for Guanyin, a Chinese deity of kindness and compassion. The story goes that a poor farmer named Wei Yin spent all his days in back-breaking labor, but still found moments to tend to a dilapidated statue of Guanyin in a run-down temple he passed every day on his way to and from the work fields. One night, an exhausted Wei Yin fell asleep in the temple while tending to her statue.

In a dream, Guanyin led Wei Yin to a cave behind her temple, where she told him he would find a gift. When he awoke, he followed her guidance and found a small tea shoot. Wei Yin was delighted, and vowed to treasure this gift. He took the tea shoot home and replanted it, where it grew strong and healthy, with large glossy leaves! This beautiful tea plant was a sight for sore eyes, as the region was arid and the farmers had little success.

Wei Yin, being a kind and loving soul, shared cuttings of his plant with all his neighbors and family. Each shoot grew just as strong and healthy as the first, and the act of sharing tea nourished the whole region. The region flourished ever after.

Isn't that the sweetest? This gorgeous leaf is designed to be enjoyed gently and over the course of many infusions. Its delicate aroma and many layers of soft floral notes are set to their best advantage when allowed to cool a bit before drinking. Try this one done gongfu style with several short brews and sipped just above room temperature. Really sink into it and allow all your senses to engage with this gift of the goddess Guanyin. Follow the link here to pick some up today! 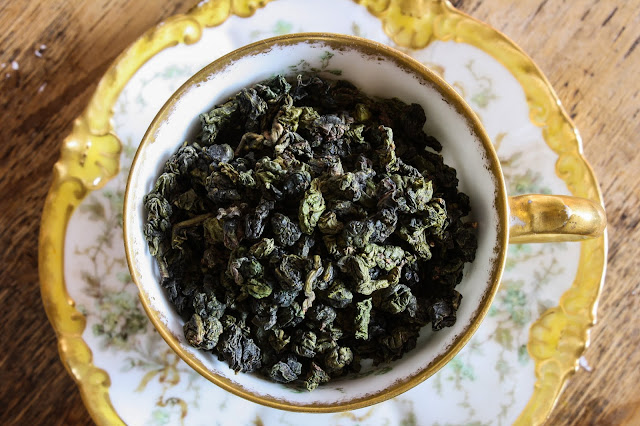