When teaching classes, speaking on panels, or even just in casual conversation, two of the most common questions I've been asked are:
Tea terminology can be confusing to those who work outside the industry or are just getting their start. We tea workers have our own language for sure! When it comes to oxidation vs. fermentation, things can get especially murky. We hit a translation barrier when working with Chinese tea especially, as it's pretty standard for the terms to be used interchangeably in that region. Generally speaking, however, oxidation and fermentation refer to two completely different processes. Let’s break it down (ha ha cellular biology joke). 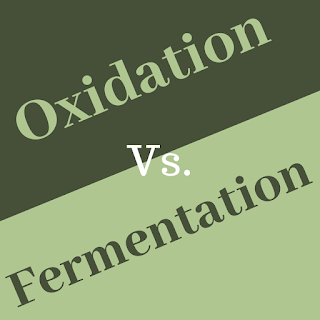 Oxidation is the process of oxygen getting into the cells and  primary factor that distinguishes between the six true types of tea: white, yellow, green, oolong, black and post-fermented. You know how an apple turns brown when you bite into it? That’s oxidation! The cell walls are broken and oxygen floods in, causing a release of an enzyme (polyphenol oxidase, or PPO), which creates a new chemical within the plant (called o-quinones), which in turn react with amino acids to produce melanin pigments.
Yowza. To sum up, when cells are damaged in tea leaves (or apples, lettuce, etc.), a chemical reaction domino effect causes the flesh to turn brown. In addition to the visual change, the reactions taking place inside the tea leaf can change the flavor, mouthfeel and even caffeine bioavailability in your cuppa! For more info on the oxidation levels in various teas, read my recent blog post on the six true types of tea.

Fermentation occurs when yeast and/or bacteria break down plant or animal matter, basically digesting it over time. The byproducts are carbon dioxide, alcohol, and super delicious flavor! In the tea world, this process is applied intentionally to a category of tea called “post-fermented,” “hei-cha,” or “aged tea.” The most common family of hei-cha is pu-erh, which hails from the Yunnan region of China and has been treated with either a fungal or bacterial colony, then left to age in a cave until it’s juuuuust right. Hei-chas are like the cheeses of the tea world! Tons of variety with lots of approaches, some funkier than others. Fermented teas are a wild world, and I highly encourage you to explore them. Warning: it’s easy to get hooked on these and forget other teas even exist!

I hope this cleared up the terminology for you a bit. If the distinction between oxidation and fermentation is still unclear, drop a comment and I’ll do my best to clarify!