If you've read many blog posts here, you probably already know my superpower: I taste ideas.

While I generally apply these thought-flavors to tea blends representing a specific character, place, or even as dialed in as a single word, I also experience themes and abstract concepts as rich, complex flavor profiles. A calendar recently told me that "National Tell a Fairy Tale Day" falls on February 26th. A delightfully silly made-up holiday that I am 100% using as an excuse to geek about historically common fairy tale motifs! Here are some of my favorite themes:

Extended Periods of Sleep
Sleeping Beauty, Snow White, even in fairy stories as modern as Cat Valente's Fairyland series. There's something enchanting (and for tired moms like myself, envy-inspiring) about the concept of a sleep so deep that only magic can break it. Magically-induced deep sleeps taste indigo, like buttery blue peaflower and drippingly ripe plums.

Starvation/Gluttony
Whether magical feasts that tempt a heroine into faltering or a family fighting famine (hell, Hansel & Gretel has both), the state of a belly is a common concern in fairy tales. Desperation for sustenance tastes dry and bitter, like chicory root or white pepper. Helpless gluttony tastes shapeless and fatty, like a mouthful of olive oil or overly-sauteed mushroom.

Birth Order Dynamics
The first son vs the seventh, the middle child lost in the scuffle. Family dynamics always make for an interesting story, and birth order is a theme that crops up a lot in fairy tales. The expectations of family elders tastes tart and dark, like a pomegranate seed, currants or under-ripe blackberry. The desperation to prove oneself to their family tastes like all those things with some spice to it, like a dry sangria. The absolute confidence of an eldest brother who knows exactly his place tastes bright and earthy at the same time, like humusy soil with lemon zest.

Big Fish Stories
Exaggerating one's successes! A splendid pastime and the root of many an antic in many a tale. The wildly overblown storytelling that occurs in barrooms might cause its wielder to over-commit to a staggering feat of bravery (see the Brave Little Tailor) or, conversely, embarrassment and frustration in the face of a social group that openly mock and disbelieve the storyteller. Either way, braggarts gonna brag and we see this theme over and over. Self-inflating deceit tastes like gravel, all gritty and mineral-heavy with undertones of brown topsoil.

Trickster Tales
These are always so fun! Sometimes a trickster is mischievous, but overall benevolent. More often, they are selfish and short-sighted. My personal favorite has always been Anansi the Spider, but I'm also quite partial to Coyote. Tricksters were my idols and inspiration as a child, so it's probably not surprising that I love how this motif tastes. Think pale purple ube mochi cake with tongue-tingling clove and pop rock candies.

Talking Animals & Objects
Fairy stories are full of animals and objects lending advice, warnings, and sometimes even their own mischievous deviltry. Whenever a book or a frog is speaking, or a fox or door, I taste a dry cedar tree in the sunshine. The bark is fibrous like fox fur and tastes the way amber resin looks. That's the flavor profile of talking animals & objects in a story!

Transformation of the Physical Body
Seals to human women, princes to frogs, hapless adventurers to stone or maidens to trees, get my drift? Fairy tales are packed to the gills with transmogrification. The physical change of any given body, whether wolf, wood, or whatever, tastes like a combination of a saltwater fish's fatty underskin and roasted marshmallow still hot on the skewer.

Creation & Origin Stories
Mythology and stories related to large-scale beginnings (think creation of the universe, origin of a species, world or practice) taste like a rich, spiced sunrise. The rise of new life and the simultaneous evolution of both context and content? Love it! This idea tastes complex and powerful with a million striated layers of blood orange, sun-warmed cinnamon and rich earthy red wine flavors that all comprise the profile of a Great Work of Creation.

Keys & Passwords
Some of my very favorite fairy tales are centered around keys and passwords. The unlocking of a room, a box, a secret, is dangerous and irresistibly intriguing. The threat of the unknown tastes medicinal and citrusy with a sweet grassy core (lemon grass or deep-steamed green tea like Sencha or the Colombian-grown green tea at our shop). The inevitability of obsessive temptation, the enthrallment of new discovery, the intoxication of the locked door's siren call, tastes like a carnelian stone might if you could eat it like a jelly bean. Persimmon is the closest analogue I've found.

Cleverness & Wit
Gotta love a story involving someone using their good brain to get out of a jam! This flavor profile is all things erudite and mischievous. Intellect is a wet mineral taste with hints of floral smoke. A brain keen of observation and quick to adjust is minty and vegetal. The cojones to do something with all that sharpness is aged leather. 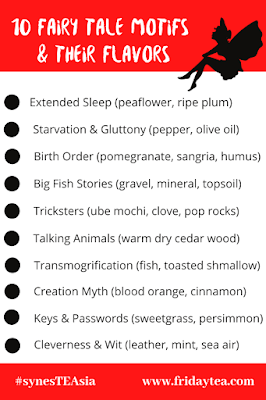 Now, obviously there are far more recurring fairy story themes than the ten above (abduction of a child, traversing a great distance, frailty of the human spirit, rags to riches), but I imagine you have more to do with your day than have me continue to talk your ear off (dismemberment: tickling sensation and dry peppery table wine). I leave you with this thought: what fairy tale theme speaks to you and why? Drop a comment and let me know.